The small cylindrical goat cheese from the area around Janier Chavignol AOP – Chevre Fermier has been produced since the 16th century, but the earliest extant written record dates from 1829 when its name and brief details of the cheese were recorded by a tax inspector.

Crottin de Chavignol is subtle and slightly nutty. In its youth (Chavignol jeune), its dough is solid and compact, and its rind is white. As it ripens (Chavignol bleuté), it takes on a stronger flavour and develops a harder rind. With full maturity (Chavignol affiné), the dough becomes crumbly and the mould on the rind matures into a bluish colour. The cheese is marketed and eaten at all three stages of maturity.

A classic dish is baked Crottin de Chavignol on a green salad. The dish is said to go well with a Sancerre wine from its home region. Although commonly served as a baked starter, Chavignol is also often found cold as a component element of a cheese board selection. 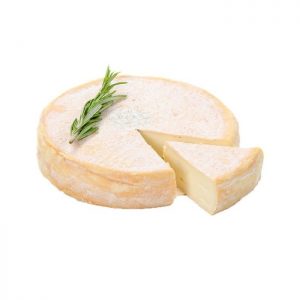