Beginning from the grandfather; Clément-Félix JANIER, from Jura andnlocated in “LES JANIER”, in a small place called Piards, close to Prénovel, traveling to Lyon with his cheeses: “Compté”.  Noël, son of Clément, fell in love with the cheese industry as a kid, joined and helped the family business. Several experiences allowed the success of the famous “Bleus d’Auvergne” and “Camemberts”.

Munster or Munster Géromé is a 45% fat, (27 % fat dry weight) dry to creamy, ivory colored, pungent, cow’s milk cheese made with unpasteurized cow’s milk. The natural edible rind of a young Munster begins with a pink tinge for the youngest and drier Petit Munster, to a deep red for a two or three-month mature creamy, smooth Munster.

Janier Munster is made from cow’s milk, mainly in the Lorraine and Alsace region of France. With a slightly salty flavour, this French cheese is a suttle, melting cheese with a fairly pronounced taste.

Munster is one of the really stinky cheeses of France though the cheese’s taste is far from as strong as the smell. The smell is a reaction to repeated washing in brine and rock salt which prevents the growth of any mold while intentionally affecting the taste and smell.  Nevertheless, plastic wrap, refrigeration, (not freezing), makes this tasty cheese easy to serve and enjoy. 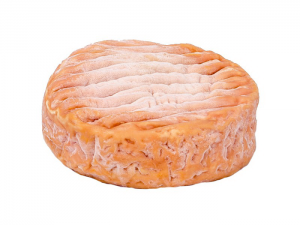