400g to 600g Harvested rock lobster fresh from the farm here in Singapore early in the morning. Allowing for farm to table quality. Live rock (spiny) lobsters have a soft texture and delicate flavor for the whole family to enjoy.

Rock lobster fresh is also known as spiny lobster or warm water lobster, and is different from Maine lobster, referred to as cold water lobster. Maine lobster only comes from the Northeast coast of the United States and Canada, where the waters are routinely cold. However, some rock lobsters, despite being warm water crustaceans, live in cooler waters, namely around South Africa and New Zealand. The cooler water temperatures means the lobsters mature more slowly, rendering the flesh of rock lobster harvested from these locations denser, sweeter and less prone to mushiness, a characteristic that often plagues rock lobsters. For the highest-quality rock lobster, choose lobster harvested from South Africa or New Zealand.

Cook rock lobster tails whole, split in half or butterflied. In all cases, wash under cold running water before cooking, scrubbing with a stiff brush to remove any debris. You can butterfly rock lobster tails, or halve either whole lobsters or tails. To butterfly, use kitchen shears or a sharp knife to cut lengthwise along the center of the upper shell — the rounded, harder side of the tail. Pull apart the halves along the cut, exposing the meat, and gently pull up the flesh so it sits partially exposed. To halve a whole lobster or a tail, cut lengthwise down the middle of the underside of the lobster, where the legs are connected. This is the same side as the white, softer shell of the tail.

Cook rock lobster by broiling, roasting or grilling, as well as boiling and steaming. Whole rock lobsters take best to boiling or steaming, while cut lobster cooks best with high-heat methods, such as broiling and grilling; the exposed flesh can char and crisp slightly, highlighting the natural sweetness of lobster meat. When cooking cut rock lobster over high heat, brush with olive oil or clarified butter before and during cooking to ensure that the meat does not dry out. If steaming or boiling, season prior to cooking to gently flavor your rock lobster. For optimal results, never cook rock lobster tails from frozen, as the meat will cook unevenly, leading to low-quality lobster meat.

Rock lobster is fully cooked when the flesh reaches 135 degrees Fahrenheit as measured by a quick-read thermometer. The outer shell will turn a bright red, although the spots on the shell will still be visible, and the meat will become opaque and white. Any juices in the lobster will solidify and turn white. Because lobster will continue cooking after it is removed from heat, it is better to slightly undercook these crustaseans, because overcooked rock lobster is very dry, with a chalky, tough texture.

Click the image for an easy Lobster Tails Recipe with Lemon Garlic Butter. 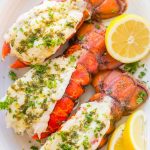 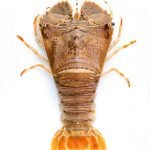 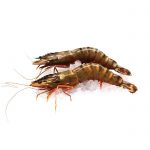